American chestnut was once a dominant wood species in the mid Atlantic region of the United States, as it was one of the favorite building materials used during the reconstruction after the Civil War.  Unfortunately, due to a blight at the turn of the 20th century, living trees are now extinct.  But we still salvage its lumber, which ranges in color from light golden to chocolate brown and can be scattered with small worm holes. 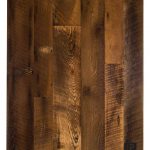 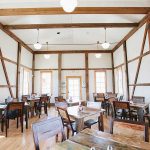